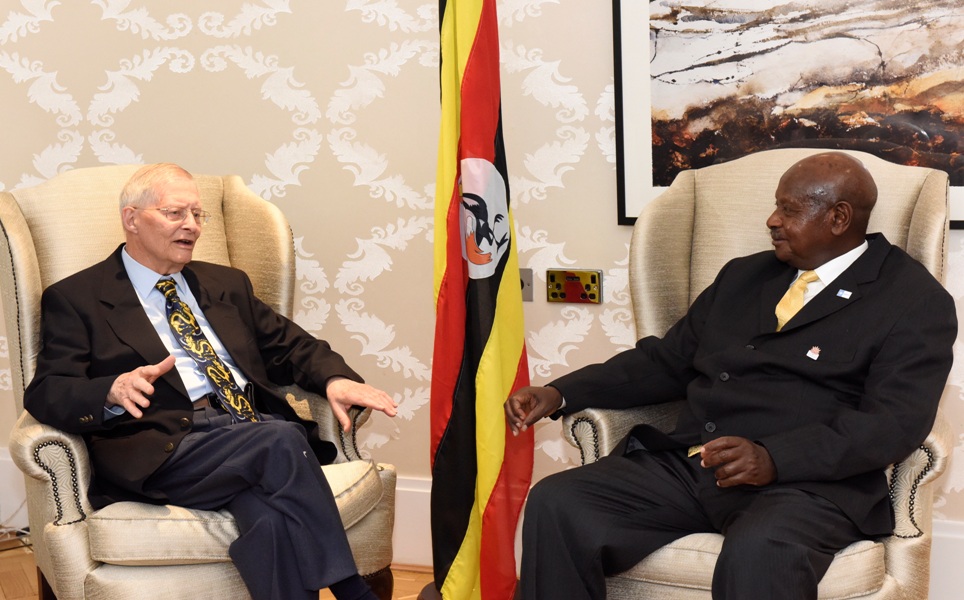 Sometime in 1963, a young teenage guy at Ntale School came down with a serious fever with a temperature of over 104degrees centigrade.

This was strange considered that the normal body temperature is said to be between 98.6 degrees Fahrenheit (37 degrees Celsius).

“According to one of my teachers who took the temperature, I was practically dead. The temperature was too high. I was taken to hospital and I became delirious,” President Yoweri Museveni said, in one of those rare moments, recalling how one of his teachers Mr. Gerald Sullivan saved him from chickenpox.

During his two day working visit to the United Kingdom, the President met his former Economics teacher Gerard Sullivan and his wife Mary Sullivan.

They were accompanied by a former Headteacher of Mbarara High School John and Ailsa Nicholsan and Brian Remmer and Maurice Reeve a former English teacher.

The nostalgic meeting that raked in emotions from a teacher who taught a young man he described as ‘A tall, serious looking student’ recalled how he treated the young Museveni of chickenpox, which he later contracted himself.

President Museveni recalled how he got a bout of malaria that lasted for three days from Thursday to Saturday but as he sat on his bed one morning, one of the boys noticed blisters on his chest and immediately called a one doctor Philpot.

“Dr. Philpot came immediately and said this is very serious. They took me to an isolation centre and later teacher Sullivan took me to his house to look after me. The school was closed because of the chickenpox,” the President reminiscenced.

According to the President there was no immunization at the time and even at 18 years, students were susceptible to contracting chickenpox.

The President said teacher Sullivan took him in and fed him until he fully recovered.

Teacher Sullivan said he contracted the Chickenpox from Museveni and was down with a fever when Obote visited their school.

“I never forgave you because I contracted the chickenpox from you and missed seeing Obote when he came to our school,” he said.

Sullivan was later to write a book “The Making of a One-Handed Economist” in which he described the young Museveni as a tall, serious looking student who asked him a fundamental question, which stopped him in his tracks.

Sullivan had been teaching about the location of Industry, telling students why Britain had a car industry because of its abundant resources while East Africa lacked resources and focused on Agriculture.

“All straight forward stuff in the textbooks of the day which I merrily spouted fourth until, I was stopped by a raised hand. A tall, serious looking student had a question. ‘Why shouldn’t East Africa develop its own car industry?’ he asked,” Sullivan wrote in his book.

“I had been trotting out standard bourgeois economics which favoured advanced industrial economics. Yoweri Museveni, for that was the student, had asked a fundamental question which stopped me in my tracks. As I write, Museveni has now been President of Uganda since 1986,” he wrote.

President Museveni talked about several of his former teachers including Mr. Reeds and Robert Ball with whom they acted “Murder in the Cathedral,” a play by T.S Elliot

Sullivan later handed the President a Ntale alumni classlist of the 1967.

The President said the British teachers gave them a strong foundation and said his former teacher must be proud that he taught a student who has contributed to the development of Uganda.