Ugandans have reacted to a dress code notice by the public service ministry that requires civil servants to dress in a skirt or dress that is not above the knees, with a long or short sleeved blouse, and clothing that covers up cleavage, navel, knees and the back.

According to a notice released by the ministry, sleeveless blouses, flat shoes, coloured hair, chandelier earrings or tight fitting dresses and skirts have also been banned in offices.

Male Public Officers shall not be allowed to wear open shoes and tight fitting trousers at office premises, the notice directs.

But according to controversial Makerere University researcher Dr Stella Nyanzi, the miniskirt ban is meant to cause Ugandans to “be distracted from the planned removal of the presidential age limit.”

She argues that the matter of public servants dress code is trivial.

“Who really cares what public servants in Uganda wear, when the emperor walks around naked?”

In her usual strong language, Dr Nyanzi instead argues that the regime is naked and rallies Ugandans to oppose the controversial proposed presidential age limit bill.

Recently, Justice and Constitutional Affairs minister Kahinda Otafiire said the constitution was not God’s commandment and would be amended to remove or maintain the age limit.

But Nyanzi, still facing cyber harassment and offensive communication relating to among others calling three-decade ruler Yoweri Museveni “a pair of buttocks”, thinks it is time to stop Museveni from standing for president in 2021 instead of dealing with trivial matters.

The age limit clause bars anyone to stand for president beyond the age of 75 and Museveni will be over 75 by the end of his current term in 2021.

For the former rebel leader-turned-liberator to be eligible for re-election, the age limit must be erased from the constitution. 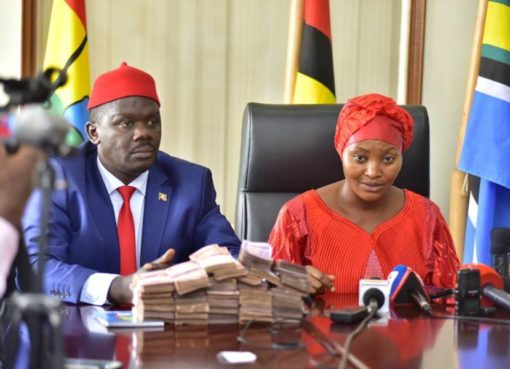