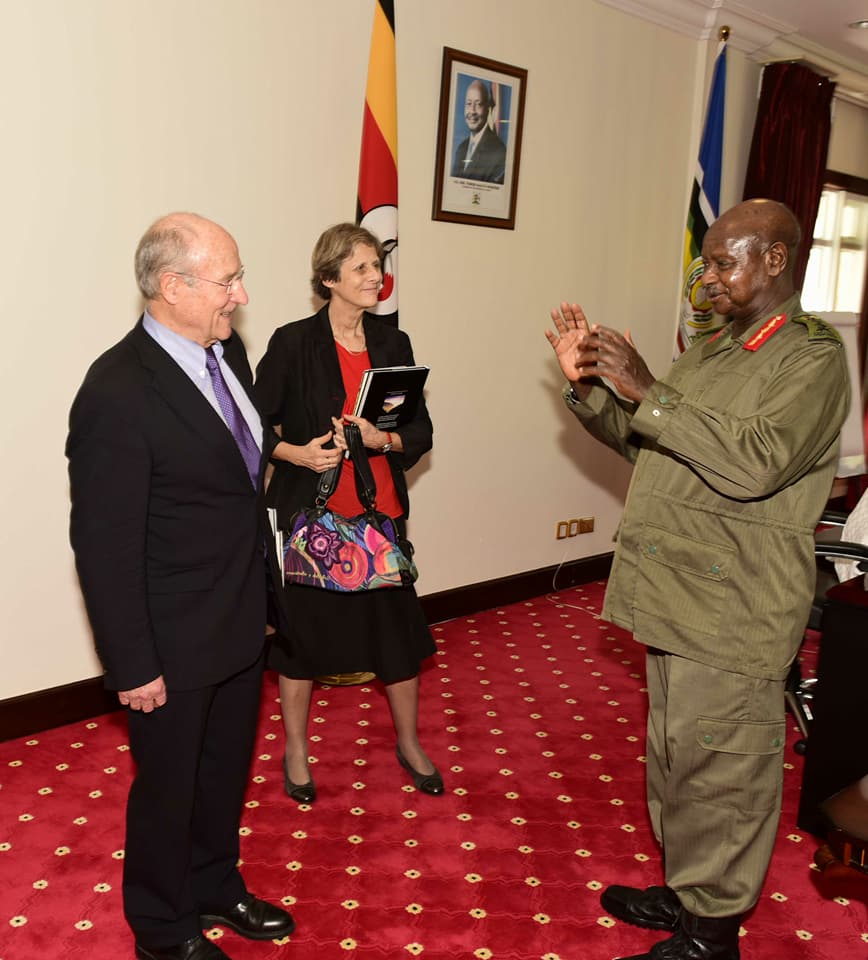 President Yoweri Museveni on Tuesday met an old friend Dr. Pierre Perrin, formerly working with the International Committee of the Red Cross, abducted by NRA and expelled by government forces in 1984 at the height of the NRA liberation struggle in Luwero triangle.

“To my old friend Dr. Perrin of the Red Cross whom I met in interesting circumstances in 1984, January just before our big January victory in Masindi on the 20th of February,” President Museveni wrote in a copy of the Mustard seed that he donated to Dr. Perrin at the meeting this afternoon at Entebbe State House.

On January 7, 1984, eleven employees of the Red Cross then on a routine medical mission fell into an ambush by the NRA liberation army that had infiltrated Luwero. The employees included Dr Pierre who was then Chief medical officer at the time of capture and helped several injured soldiers.

On January 9th, the NRA released 7 hostages; 4 Swiss including Pierre’s wife Christine Perrin who was then a nurse with ICRC and 3 Ugandans. Two weeks later the rest of the hostages including Dr. Pierre Perrin were set free. However, Pierre and his Swiss team where immediately arrested by the government forces and questioned about Museveni and the NRA. When they testified that they were treated well and left to go, government expelled them to avoid positive publicity for the NRA in the diaspora. The newspapers in Europe talked widely about Museveni and the abduction and government did not want to risk them portraying Museveni as a good person.

On February 20th, the NRA attacked Masindi Barracks in a major victory against the UNLA government. Pierre later married Christine and the couple has three children; a pediatrician, civil engineer and systems research engineer.

“You were on a medical mission when I met you. I have been dying to see you. I can still recognize you very well. It was really dramatic, so many interesting things…I have always been asking about you,” he said.

Dr. Pierre Perrin MD, MPH now retired and is an expert in the Public Health and Human Security in Complex emergencies based in Choulets, Sauvery, France. They were accompanied to State House by the Head of Delegation, the International Committee of the Red Cross in Uganda Zoran Jovanovic and the International Relations and Communications expert at ICRC in Uganda Judith Kiconco. The meeting was also attended by the NRM Secretary General Justine Lumumba Kasule.

“To Madamme Perrin whom I missed to meet 34 years ago, which was much better; otherwise, it would have been too tiring for her to walk 200 miles to and from Ngoma peninsula. I salute the stamina of Dr. Perrin for the long walk,” he wrote.

President Museveni said he has been looking for Dr. Pierre since the end of the war until recently when he talked to the President of the ICRC who visited Uganda and promised to trace him. He encouraged him to write his experiences at the time.