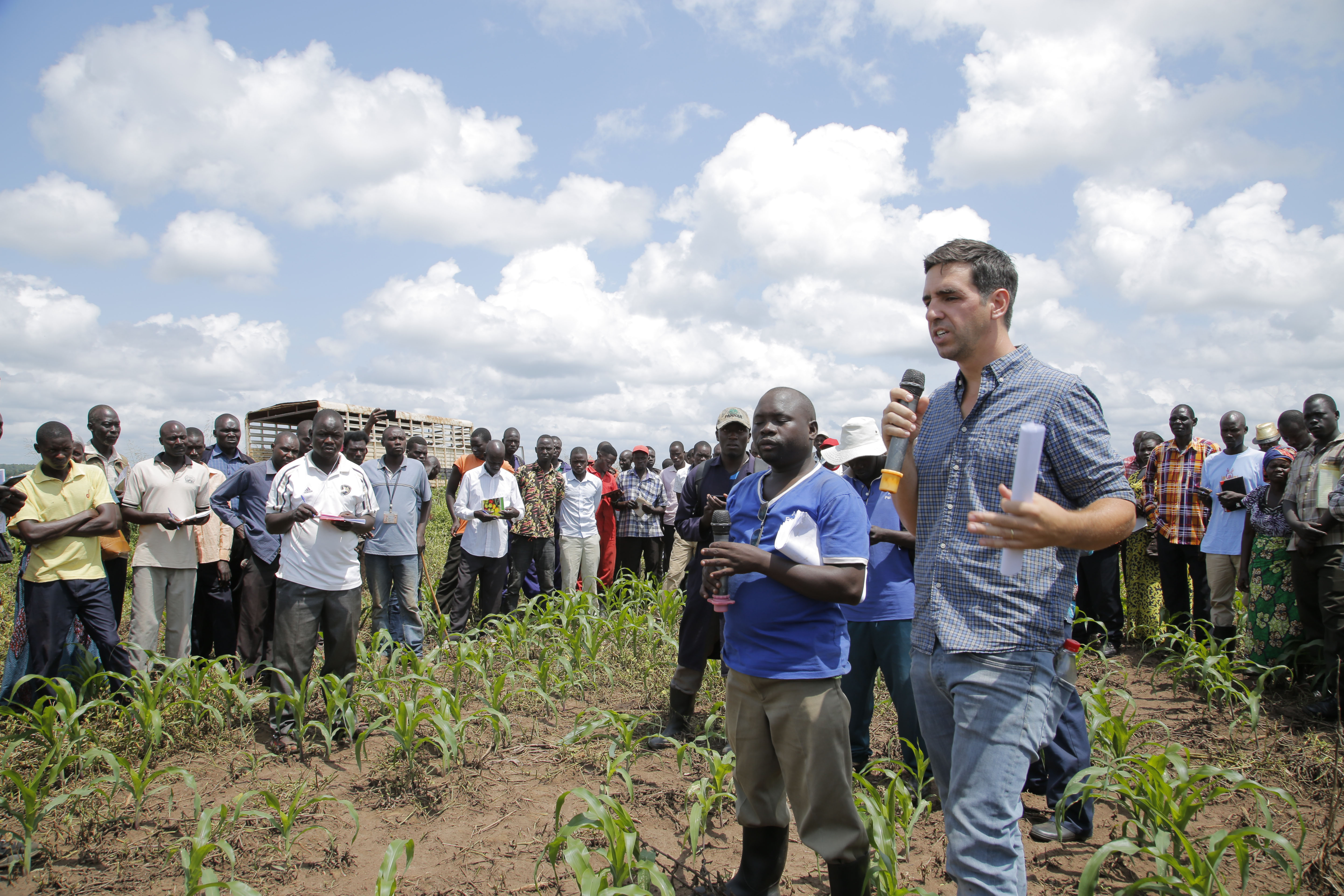 Agilis Partners, an agricultural development company recently held a sensitization workshop for farmers on how to improve their yields as well as fight the dreaded army worm at its farm located in Kigumba town.

The company that owns Asili Farms and the Joseph Initiative is one of Uganda’s largest maize and oilseed farming companies and exporters.

Under a conservation agriculture and precision farming approach, Agilis has substantially invested in the agribusiness value chain and in the process maximized yields efficiently in an environmentally sustainable manner.

Benjamin Prinz, the Managing Director and Co-founder of Agilis Partners explains that the company introduced an inclusive approach to farming where by the community is involved in the agricultural production value chain by participation and close collaboration, thereby accessing a bigger regional market.

“Our business is not only farming. We are also distributing maize through the Joseph Initiative, a grain management and agricultural services company. So it is in our best interest if the neighbor next door is producing very good quality grain. We invite farmers every six months just before the harvest period, train them on the best farming practices so that they are able to produce good grain.

“We have centers that buy grain from the farmers and that way, we are able to not only become an investor in the farming activities but also partner with the farmer to help co-market their grain with us,” he says.

Last year, 3,400 farmers were trained on sustainable and climate-smart cropping techniques. These farmers were subsequently integrated into the 15,000 farmers’ supply network of the Joseph Initiative, one of the companies owned by Agilis.

“We take farmers through the technicalities of proper farm and crop management – including timing, spacing and management of crops to ensure timely harvesting and maximizing of yields, both quality and quantity wise,” noted Prinz.

As a result of this investment, Kiryandongo and Masindi Districts are considered one of the biggest suppliers of maize in Uganda and the East African region as a whole.

Peter Dibele, the Resident District Commissioner (RDC) Kiryandongo notes that the investment in the area is a welcome relief given that farmers who in the past realized only five bags from an acre are now getting on average 8 to 10 bags from the same size of land.

“The land in this area is very fertile and yet many people remained very poor. I am happy that investors such as Agilis have given the smallholder farmers an opportunity to learn so that they too can put that knowledge into practice in their smaller farms. I am also a farmer and learnt new tips that I will employ on my farm.

Adding, “Poor farming methods have largely contributed to poverty in this region. We are supposed to be feeding the entire nation but we haven’t fully learnt proper post-harvest handling methods. We are happy that today, the farmers here have this unique opportunity to see for themselves and learn from the experts,” he said.

Enid Nyangireki, 57, a resident of Kibamba Village, Pakanyi Sub-County in Masindi district says that unlike before, she is now able to get higher yields from her two acres of maize, thanks to the trainings she has received.

“This is the fourth time I have attended these trainings. I used to harvest about two tons but today, I get on average four to five. I have learnt that using improved seeds, increases yields. The population of plants in an acre is also important as it ensures that the plants get the desired nutrients and in the right amounts,” she explains, adding that she has also learnt to control the armyworm which is a serious issue in the area.

In parts of the country where such huge investments are being undertaken, there has always been the thorny issue of land acquisition and allocation to investors. Conflicts over land are not new in Uganda and with Agilis currently growing crops on 15,000 acres, one would think that this is one issue that they have often contend with.

Adding, “We have never been given land by the government, it is not something that we pursue. Actually it is a policy within the company that we do not look for government land. Our farm here in Kigumba was previously owned by a large company and is a long-term leasehold ownership. Some of the other land we have is rental and we are renting from Ugandan individuals.”

He also maintains that their relationship with the community has been very positive and that they have always been marked as a company that is not only investing but is also ensuring the well-being of the community.

Prinz explains they are able to meet the demand from the region thanks in part to their investment in post-harvest infrastructure such as storage silos and grain handling equipment. This infrastructure is located in Masindi and Kiryandongo.

The good storage practices not only help to reduce aflatoxin, a food borne carcinogen found in grains in tropical climates, but also reduces post-harvest losses.

“The company has also been credited with transforming Uganda’s regional brand into a high-quality maize producer,” he says.

The company is also actively looking into value addition.