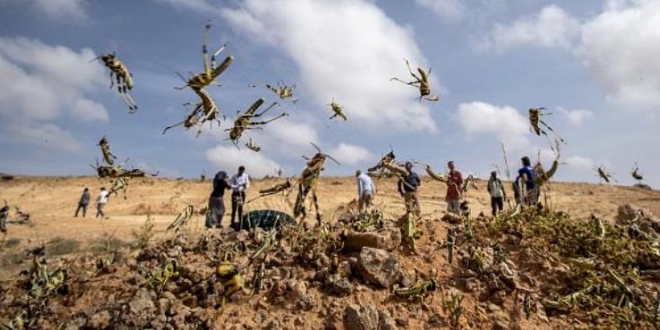 The government has forked out shs2.8billion to procure 10,000litrs of Fenitrothion, a phosphorothioate insecticide widely used for aerial spraying against locusts.

This development was revealed on Tuesday by officials from the Ministry of agriculture during a press briefing. Ministry of Agriculture Animal Industry and Fisheries’ (MAAIF) Permanent Secretary,  Pius Wakabi Kasajja told journalists that the pesticides will reach Uganda in three days from Japan.

The pesticides will first be taken to Kenya for processing, “The manufacturer of Fenitrothion 96% ULV, Ultra Low Volume, a chemical used in aerial spray is in Japan. The chemical is brought in solid form, but mixed in Kenya,” Wakabi relayed

The Food and Agriculture Organisation (FAO) has offered to airlift the pesticides from Nairobi to Soroti.

State Minister for Animal Husbandry, Bright Rwamirama told journalists that aircrafts have been secured for aerial spraying. The aircrafts, he said, were cleared on Monday and will be stationed in Moroto.

Rwamirama added that one aircraft was given to Uganda by the Desert Locust Control Organisation of East Africa (DLCO-EA).

He further said the ministry had also hired another aircraft from Kenya for backup.

Locusts invaded Uganda about two weeks ago through Amudat, Karamoja sub-region. They have since spread to 17 districts including; Abim, Kaabong, Nakapiripirit, Amudat, Agago, Katakwi, Nabilatuk, Moroto, Kitgum, Soroti, Kole and others.

DLCO-EA country representative told the press recently that the invasion in Uganda is meager. “There are no serious swarms in Uganda. The ones that have come have failed to find proper breeding grounds.”