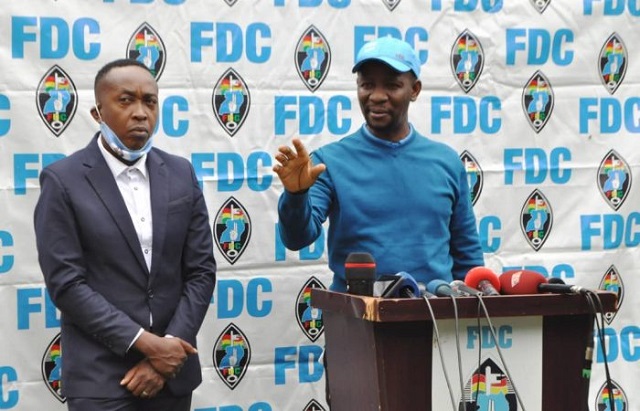 Forum for Democratic Change-FDC party has said it is against the government’s decision to give Members of Parliament 200 Million Shillings to buy cars.

Speaking at the FDC party headquarters at Najjanankumbi in Kampala on Monday, Ibrahim Ssemujju Nganda, party spokesperson and an MP himself, said the government must adopt a policy where all its employees including MPs, should be just given interest-free loans that should be recovered from their monthly salaries to buy for themselves cars.

Ssemujju’s comments come less than a week after 529 MPs and 26 Ex-officials were each last week given 200 Million Shillings to buy themselves a car.

Asked about FDC Members of Parliament who were part of those who received the money, Ssemujju said it’s upon individual members to decide what to do with their money.

On whether it is a right for MPs to take money yet the country is in the middle of a pandemic, Ssemujju said the principle remains that it is wrong to give money any time.

In the 10th Parliament, Ssemujju who was the chief opposition whip introduced a motion to have the government stop buying cars for all its employees. He met with the Minister of Public Service Muruli Mukasa who said it was a good policy that government would embrace.

However, he asked that they first ascertain the number of cars that government has and then would report to parliament on the way forward. But according to Ssemujju, that was the last he heard from the minister.

FDC has also called upon President Museveni not to extend the current lockdown when it runs out on Thursday this week. Ssemujju said although as a party they supported the lockdown that was announced on June 18 as a measure to slow the spread of Covid-19, it can’t be a permanent solution.

Ssemujju said that government should speed up the process of buying vaccines so that people are vaccinated to safely return to their work.