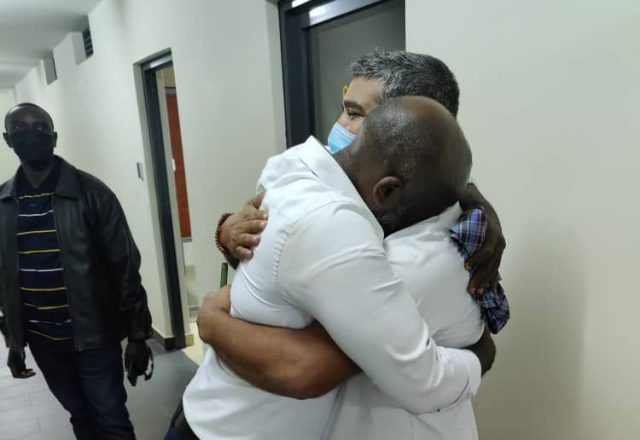 Dr Muganga was arrested on Thursday afternoon from his office on Jinja road in Kampala.

On release, Muganga was received by Rajiv Ruparelia the Managing Director of Ruparelia Group of Companies.

In a short video posted on social media, Dr. Muganga who was in the company of businessman Frank Gashumba thanked all members of the public who had stood out for him.

“I am back but it was because of you. Thank you from the bottom of my heart. I am still alive, happy determined and I can always count on you brothers and sisters. This man here (Frank Gashumba) and others out there, you are great and I am forever indebted,” Muganga said.

Gashumba thanked media houses, Facebook community, and everyone else across the various social media platforms who put their voices and power together to push for the eventual release of Dr. Muganga following his unlawful arrest and detention.

“The power definitely belongs to the people, and none of this would have happened without all your efforts,” Gashumba said.

He noted that they would be releasing a statement on Saturday on the matter.
Gashumba also thanked President Yoweri Museveni for the intervention in the matter.

“We would also like to thank President Museveni for his intervention in the matter that saw the immediate release of Muganga. God bless you all, and God bless and protect our country,” he added.

Muganga was arrested on Thursday by what the Defence Spokesperson Brig. Flavia Byekwaso said was in connection with illegal stay and espionage.

“He was arrested by joint Security Forces in connection with espionage and illegal stay in the country. Investigations into the matter have commenced. His status in Uganda is not clear because he holds a foreign passport and has no work permit.”

Dr. Muganga’s arrest had also drawn wide condemnation from his family members and academic staff who questioned why the security did not just summon him but rather resorted to cruel and inhuman arrest.

On Friday, family members led by Bruno Makyabire (nephew) and Muganga’s sister Hellen Batambuze who were flanked by their lawyer Isaac Ssemakade and Gashumba appealed to the Government agencies holding him to allow them access.

“Muganga is my uncle and I have known him all my life and I am a very fully grown old man now with children. On Thursday I received a very terrifying phone call from someone that my uncle was being dragged at the stairs of Victoria University by armed men. It was not a good day because I believe that a person of his stature should have been treated like that. If he hasn’t resisted arrest nor been summoned, you don’t kidnap him,” Makyabire said.

Ssemakade noted Muganga’s kidnap was similar to the kidnap of Makerere Vice Chancellor Vice chancellor of Makerere University, Frank Kalimuzo who was a close friend of Idi Amin, was kidnapped and disappeared.

Gashumba condemned security over the manner in which they had effected the arrest. He also noted that the move by security to arrest Muganga was part of the wider scheme to implicate the Banyarwanda in acts of espionage and make them a hated tribe in Uganda.