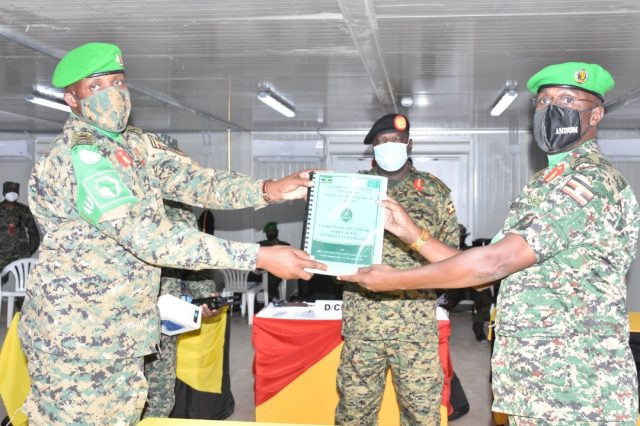 Brigadier Keith Katungi has taken over the command as the Uganda Contingent Commander (CONTICO) in Somalia under African Union Mission in Somalia (AMISOM).

The handover ceremony which was held at Base Camp Mogadishu was presided over by the UPDF Deputy Commander Land Forces (D/CLF) Maj Gen Sam Okiding.

Gen Okiding congratulated the incoming CONTICO Brig Keith Katungi encouraging him to be strong and at times make strong decisions which many a time save the institution.

In his remarks the D/CLF addressed the fact that Uganda as a country can only handle the military challenges faced in the Operation area like training of the IED Personnel and unbalanced deployment of the troops and promised to handle some of the challenges that were pointed out by the outgoing contingent commander Maj Gen Don Nabasa.

Maj Gen Don Nabasa the outgoing contingent commander attributed his contingent victory over the Al-Shabab to the team work he has created with his troops, the Somali population and his sister troops.

He emphasized that despite the challenges following the COVID 19 pandemic and Alshabab attacks mostly in the Forward Operating Bases (FOBs), the UGANDAN contingent under AMISOM has played a key role in fulfilling the AMISOM mandate.

He proudly gave a brief to the UPDF D/CLF Maj Gen Sam Okiding of his achievements in his tour of duty “we have  degraded Al-Shabab for example the operation in Basra, handed over Mariangway FOB to the community among other including CIMIC operations.” He said.

In conclusion he appreciated the team work he received from various commanders and highlighted the Ambassador, the Contingent Military Commander, Battalion commanders, battle captain for all the support and guidance.

He finally called upon the incoming CONTICO to always promote team work also make use of the SNA commanders at the Joint Operation Centre at base camp because it’s hard to succeed alone.

The incoming contingent commander thanked the outgoing commander for the work well done and promised to build from his achievements.