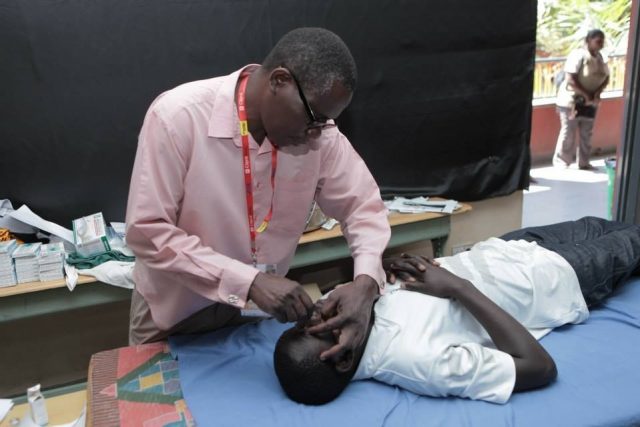 The Ruparelia Foundation will be holding a medical Eye Camp on the weekend of Saturday 20th and Sunday 21st of August 2022, in Kamuli, at the Shree Hind Bhavin Samal, providing free eye checks, treatments, glasses and cataract surgeries.

Cataracts remain the leading cause of Blindness in low/middle-income families, the highest burden is thought to be in the Karamoja and Busoga regions.

The Ruparelia Foundation, established in 2012 has always had a vision to create positive and transformative change in the community, with the belief that synergistic results are produced when we work together. With 57.1% of blindness in Uganda reportedly caused by cataracts, the Foundation has always supported this cause, this being their third Eye camp.

The foundation has always tried to attract and treat large numbers during their eye camps with the most recent one attracting thousands of people. 4032 people were screened, 275 cataract surgeries were conducted, 422 reading glasses and 180 prescription glasses were donated to the people in dire need of corrective eye glasses.

Sheena Ruparelia, the Director of Ruparelia Group, noted the foundation has so far conducted medical eye camps in Kampala but the Kamuli edition is very special because it’s happening in the town where the co-founder of the foundation, Mrs. Jyotsna Ruparelia, was born and raised.

“It warms my heart, to give back to the community, where I grew up”, Jyotsna Ruparelia.

The First Deputy Prime Minister of Uganda, Rt Hon Rebecca Alitwala Kadagaw, who is expected to flag off the health camp acknowledged the kind gesture of the Ruparelia Foundation, and believes initiatives of this nature are highly essential as they complement Government efforts.

Ruparelia Foundation would like to extend their heartfelt appreciation to the numerous partners that offered their invaluable support: The North Indian Cultural Association (NICA) has also rendered tremendous support to the cause, aimed at offering free eye health care to the people of Kamuli and the surrounding communities, Dr Agarwal’s Eye Hospital, Abacus Parental Drug Limited, SSDM Temple,  Rwenzori Bottling Company Ltd, Euroflex Ltd (Eurofoam), Pearl Dairy Farms Ltd (Lato milk), Harris International (Riham). Additionally, The Rotary Club of Jinja and The Rotary Club of Nsangi have also made generous donations. These combined efforts will ensure the eye camp activities run smoothly and a significant impact is left on as many lives as possible.