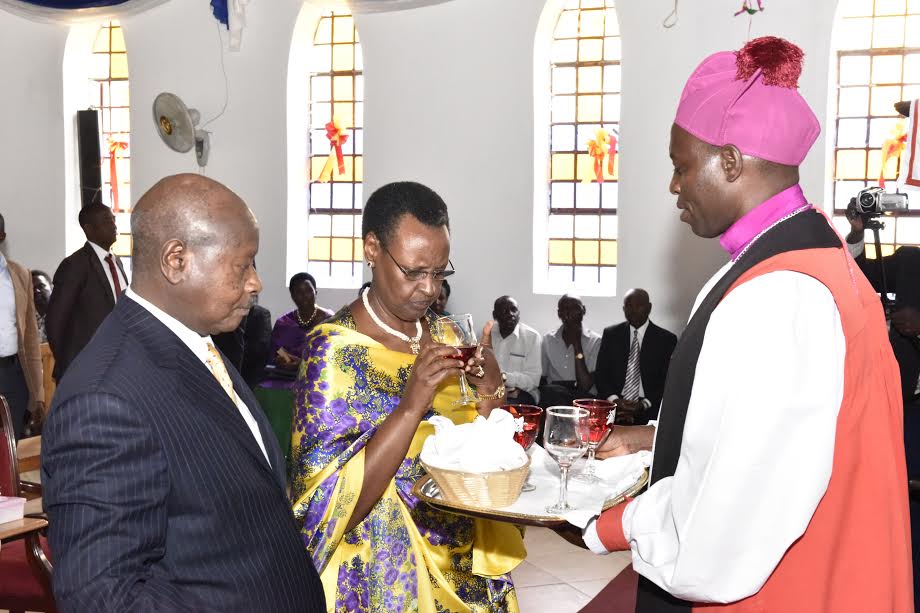 President Yoweri Museveni has strongly warned that whoever has planted eucalyptus trees in wetlands must have those trees removed forthwith. He also added that even those people who open fishponds in the middle of swamps should stop.

“Wetlands are water reservoirs. They must be conserved. Any encroachment on wetlands is disastrous. If wetlands are drained, where shall farmers access water for irrigation? How can one light fire in a granary?” he queried.

The President who was accompanied by the First Lady and Minister of Education and the Sports, Hon. Janet Museveni and a special guest from Tanzania, Dr. Anna Tibeijuka, also lashed out at beneficiaries of the Operation Wealth Creation (OWC) Programme, who receive seedlings but let them wither after planting on the pretext of having been hit by what they claim to be ‘short or long’ drought season. He noted that such trend of affairs among the people portrays nothing but laziness.

Quoting the Book of Genesis in the Bible, the President said that the human being who is the image of God was empowered by his creator to establish dominion over all other creatures.

“God created man in His true likeness….to establish dominion over other creatures. How, therefore, can you let coffee seedlings for instance dry out when you are surrounded by water source? What is the purpose of irrigation? Before the government massively distributes solar powered water pumps, farmers should utilise drip irrigation to sustain the steady growth of their crops,” he said.

Mr. Museveni commended the idea of the Church in Kyamate to build South Ankle Diocesan Community Referral Hospital. “Government spends US$75 to treat patients abroad. This proposed medical facility in Kyamate, alongside Lubowa Hospital in Kampala, will beef up Mulago Referral Hospital to treat patients with ailments that affect body organs such kidneys and hearts, tackle challenges posed by cancer as well as undertaking brain surgery to reduce ‘medical tourism’ expenses,” he said.

The President further saluted Kyamate Anglican Church management for being visionary on economic and other development projects in general.

“It is a parental role and responsibility to pack food for a school going child. These are God’s children. Parents are only custodians of God’s children. To starve a child is a sin against God,” she observed.

In a sermon, South Ankole Diocesan Bishop, Rt. Rev. Nathan Ahimbisibwe, reminded Christians that Easter Sunday is an important because it is a commemoration of the resurrection of Jesus Christ who triumphed over death to save humanity.  He prayed for the continued dividend of peace in Uganda and for further consolidation of a spirit of oneness among all Ugandans.