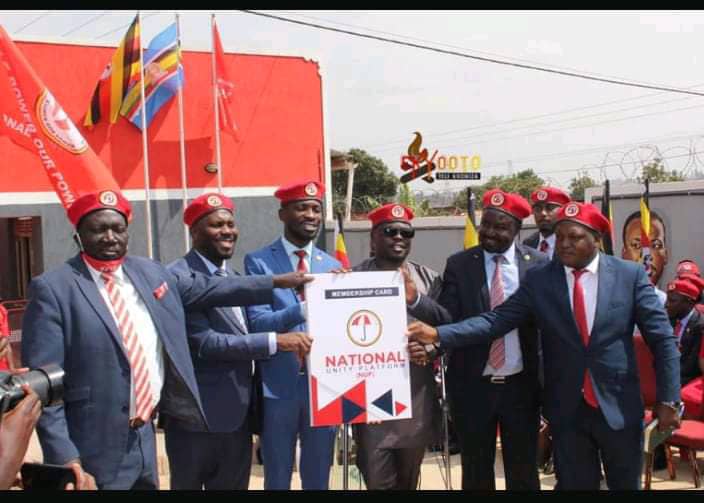 Two Members of Parliament who previously subscribed to the ruling party, National Resistance Movement (NRM) have crossed to the ‘newest’ party on the block, the National Unity Forum. They are; Patrick Nsamba Oshabe (Kasanda County North MP) and John Baptiste Nambeshe.

The two members were unveiled at the People Power headquarters in Kamwokya on Monday. The party head Robert Kyagulanyi officiated the ceremony saying that it was a great honour to have the NRM members join his side.

Nsamba described his former boss as a dictator and assured that they are going to oust him.

“We are going to change Uganda and we are not going to use guns. If you are tired of what you see happening, take a decision like I have, join our struggle and let’s send the dictator to rest.”

NUP also welcomed other leaders at different levels including mayors and councillors. Other MPs that were unveiled are; Francis Zaake, Al Hajji Ssengendo Ssebagala.

Nakawa mayor, Ronald Balimwezo also announced officially that he had crossed to NUP. He, like many other others, was availed with a party card and a brochure containing the principles of the party and what it stands for.

Balimwezeo said he was happy to find a home for the first time in his career as a politician. The same sentiment was echoed by David Kalwanga Lukyamuzi (Busujju County MP)

“There is nothing that hurts more than being there and you have no sense of belonging. I now have where to belong and I promise to deliver for both my people and the People of Uganda.”