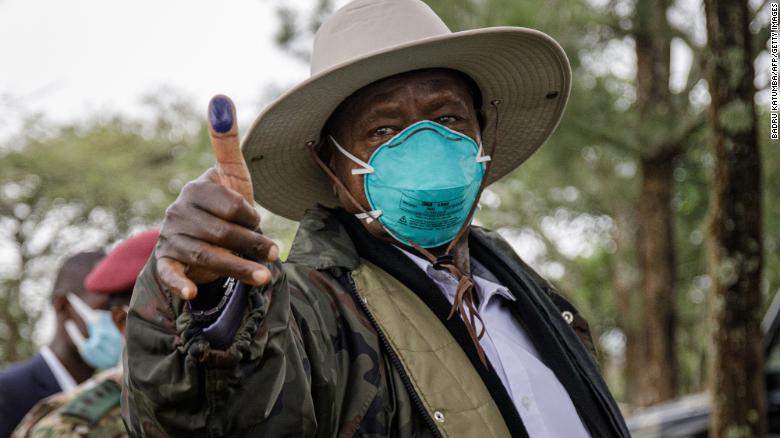 Uganda’s longtime leader Yoweri Museveni has been re-elected for a sixth term in a vote his rival has rejected as rigged, calling on the country to dismiss the results.

Bobi Wine -a singer-turned-politician, whose real name is Robert Kyagulanyi — came a far second in the vote, according to the country’s election commission.

Bobi Wine, left, addresses the media with his wife, Barbara Itungo Kyagulanyi, as security forces surround his home on Friday in Kampala, Uganda.

Wine said his team was considering all peaceful, nonviolent and legal options to contest the results, as fears of post-election unrest surfaces, following deadly violence in the months leading up to the vote.

“We are the real winners of this election and therefore what the electoral commission announced has nothing to do with the real election that took place,” Wine told CNN immediately after the announcement.

“I can call on all Ugandans to reject the announcement that has been made by the electoral commission … to reject them with the contempt with which it deserves.”

The election commission said Museveni won in a landslide, with 58.64% of the vote, while opposition Wine received 34.83% of the vote. Turnout was relatively low — just under 10 million people of the country’s 18 million eligible voters cast a ballot.

Wine said he had evidence of fraud and intimidation, but he did not provide details of that alleged evidence, saying his team would share it when communications lines were restored. He had earlier accused the electoral commission of vote rigging.

The internet in Uganda has been shut down for days under a government order. Wine said that he was struggling to get hold of his leadership team after being placed under house arrest on Friday.

Museveni, 76, has been in power for more than three decades and, ahead of this vote, outside observers believed there was little chance he would relinquish his position.

Saturday’s results follow months of campaigning that marred by heavy-handed state security responses to anti-Museveni protests, as well as the arrests of civil society members.

Dozens of people were killed in the months running up to the vote, including 45 who died in protests in November alone, after Wine was arrested for allegedly breaking Covid-19 restrictions.

Ugandans voted in the poll on Thursday amid the internet shutdown. In a speech Tuesday, Museveni confirmed his government had ordered internet providers block Facebook and other social media, accusing the platforms of “arrogance.” By morning of election day, the order was extended.

Wine had campaigned heavily on social media as some traditional outlets refused to include him in their election coverage.

The internet blackout has raised questions around the integrity of the vote count and also meant biometric machines failed to register ballots, forcing many polling stations to use manual voting and checks.

There were reports of late delivery of voting material and insufficient material at numerous polling locations. Journalists traveling to Wine’s residence for a press conference were turned back by security forces before reaching his home. Many were also forced to leave the national election tally center, despite having accreditation.

Museveni made a victory speech on Saturday evening, in which he said he believed the vote was carried out fairly.

“I think this may turn out to be the most ‘cheating-free’ election since 1962,” he said, referring to elections that ushered in independence for the country.

There were a few isolated celebrations on the streets of Kampala, but the city has been largely quiet since election day, with movements restricted and checkpoints set up by security personnel.

But many Ugandans have expressed frustration with the leader who has held onto power for 34 years.

“I’m a supporter of Museveni and have been throughout my life, but what has been happening over time has made him unpopular. It’s only wise for him now to groom a successor. I know he has a lifelong mission to die as president, but that is a recipe for trouble,” 34-year-old Susan Rukari said.

Jocelyne Karare, 65, said: “It was not fair right from the beginning. It’s no wonder of 18 million, over seven million people didn’t turn up. People are tired.”