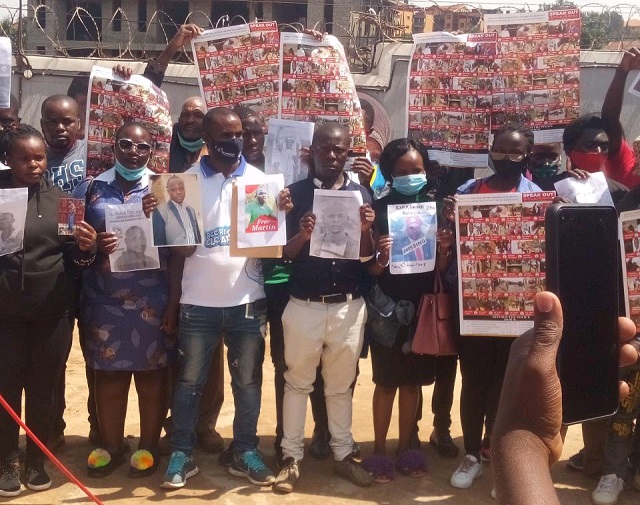 The families of several people who have been reported missing for several weeks have appealed to the government to have mercy and release them.

Yesterday, some of the relatives of the 243 people that the National Unity Platform-NUP said have gone missing without trace were at the party’s headquarters at Kamwokya to join Robert Kyagulanyi Ssentamu while he addressed a press conference on the subject.

The meeting was held moments before Kyagulanyi presented a petition to the United Nations High Commission on Human Rights office in Uganda urging it to call the government to order on the increased cases of abduction and killings. The party says the majority of those abducted are its supporters picked from different parts of the country.

Ayabare Halima, the wife of Kenneth Sseguya, 27, says her husband was arrested on January 27, from their home in Wakiso district after he was found with People Power berets and t-shirts. Ayebare who has a one-week-old baby said her husband’s whereabouts are still unknown.

Nsubuga Josh, a brother to Mulindwa Ashraf who was arrested from Namulanda, Entebbe on December 12, says his brother was picked from his saloon and he suspects that his crime was to play Bobi Wine’s music. Nsubuga says that the family is struggling to look after Mulindwa’s wife and a one-month-old baby.

For Ndawula Geoffrey Ssegamwenge, his brother John Bosco Kibalama was picked on June 3, 2019, and up to now, they have not heard from him. They have tried all possible means to know his whereabouts but in vain.

A lady in her 70’s appealed to President Museveni whom she said she has been voting for to intervene and bring back her son James Katabaazi.

Nakibuuka Solome, another mother said her son Matovu Denis, 23, and his friend Sonko Richard were abducted from Busabala in December but up to now, she has never seen them again. She said she went to all police stations around Kampala but wherever she has gone, they have said they don’t have them. She wondered why the government put up elections when it didn’t want people to have a choice of who to support.

Nanyonga Eronie, another affected relative says her husband Nalumoso Vincent was arrested from his workplace at Bugolobi. The mother of three says since then, it has been very hard to find what to eat and also pay rent.

Others who also spoke at the press conference were Ainebyona Herbert who was kidnapped from Kiruhura and allegedly tortured for days. Ainebyoona who had difficulty in walking said his captors kept on asking him what he knew about Kyagulanyi’s plan B.

Music producer Davie who was arrested on January 12 and released after two weeks said he was detained at the Chieftaincy of Military Intelligence headquarters in Mbuya where he met several people who had been arrested and detained there. Like Ainebyoona, Davie said that his tormentors kept on asking him about plan B that Kyagulanyi had after the election.

For his part, Kyagulanyi said the reason he was petitioning the United Nations was because the local human rights organizations including the statutory Uganda Human Rights Commission have proved to be incapable of doing anything to stop the torture and abductions.