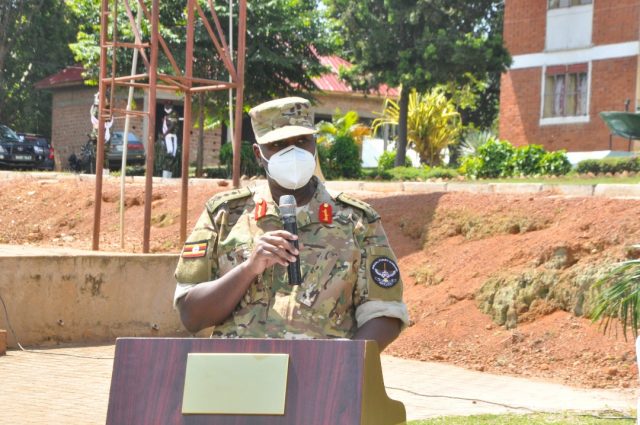 Lt-Gen Muhoozi Kainerugaba, the Commander of the Land Forces in the Uganda People’s Defense Forces-UPDF has ordered the repatriation of some UPDF officers from the Ugandan contingent in Equatorial Guinea behind the rumour that some soldiers were planning a revolt against their top commander.

Last week, rumours started doing rounds that UPDF troops deployed in Equatorial Guinea under the Ugandan Military and Mentoring Team-UMTMT had threatened to revolt against their contingent commander, Col. James Kato Kalyebara for alleged mistreatment, discrimination, suspension and expulsion of their colleagues over small matters.

The foot soldiers reportedly threatened to revolt after making various attempts to get redress from the army leadership in Kampala in vain. Addressing journalists at the police headquarters in Naguru on Monday, the Deputy Defense Spokesperson Lt. Col Ronald Kakurungu confirmed the allegations saying that the Commander Land Forces Lt. Gen Muhoozi Kainerugaba has constituted a team to investigate the matter and come up with a report.

“It is true there are allegations that came out against some of our officers and since that mission falls under the supervision of the commander Land Forces, he has taken note of the reports and sanctioned investigations to find the source of the concerns. Investigators are already on the ground to establish what is causing these complaints,” Kakurungu said.

Kakurungu said that some of the officers suspected to have leaked the rumours to the media have been recalled to Kampala.

UPDF deployed in Equatorial Guinea in 2017 to help build an army of a brotherly country, according to the Ugandan army. The soldier’s task includes among others providing security to the president, the first family and training the country’s military forces.