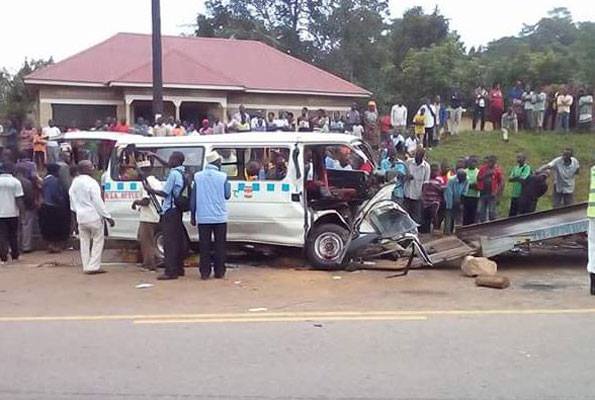 The accident happened at Kabira village, Kamengo, in Mpigi District on the Kampala-Masaka Highway on Sunday evening.

Eye witnesses say the Pajero had veered off its lane and crashed into the taxi.

Police has identified the dead as taxi driver Michael Ssebunnya; Robert Bwanika, a resident of Nyendo in Masaka District; Maria Nankinga from Mukono. The fourth was a yet-to-be identified young man.

Arafat Muyingo, the driver of the Pajero driver; Beatrice Nansamba, a resident of Kinyerere in Masaka District; Mr Emmanuel Ssenyonyi, a resident of Kabuwoko are among the injured. Others were: Aisha Nakalema of Nyendo; Gerald Mukasa of Mukono; Annet Nakasiita of Bisanje village; Jackline Namulindwa; Jane Sarah of Gomba; and Kamya Ssewanyana of Kyotera.